The Sound of the Sundial

Hana Andronikova, translated from the Czech by David Short

The editors’ job in bringing a translated piece of literature into the world can be likened to the role of a midwife: we are always mindful that others have done the most important work, and our greatest wish is to augment the experience in every way we can.

In our case, the process was complicated by an interesting conundrum: there were two existing English translations to work with, and they were very different. The first manuscript was a remarkably comprehensive translation by British linguist David Short, based directly upon the Czech original, Zvuk slunečních hodin (Knižní klub, Prague, 2001). The second manuscript, sent to us by the Pluh Literary Agency in the Netherlands (which had established a proprietary relationship with Hana Andronikova’s family) departed dramatically from the original, but it could not be ignored, as it was derived from a heavily edited second edition of the Czech (Odeon, Prague, 2008), and was then adapted from David Short’s English translation by Andronikova herself, in partnership with editor Ian Miller.

Hana was quite fluent in English. As an undergraduate she had studied English as well as Czech Literature, and later spent a year in the USA on an international fellowship at the Iowa Writer’s Workshop, producing several stories in original English featuring her unique style—striking metaphors, sentence fragments, intense emotional language—all beautifully intact. In the second Czech edition of The Sound of the Sundial, the author had clearly made some deliberate changes to her own original wording that better served to highlight this unusual writing style. In addition, she had removed some sections of the first edition that slowed down the flow of the narrative beyond what she might have intended with her many leaps through time and setting.

Here the question naturally arises: If Andronikova had, in fact, approved this second version of the translation, why did we not simply publish it as it was? The answer is: the second edition had been so deeply cut that we felt some important nuances of character development had been lost, and we wondered whether she might have reconsidered if she had had more time.

It would be impossible to convey how often we two managing partners at Plamen Press—one of us a translator of Slavic literature, and the other a literary editor—expressed to each other the wish to call Hana Andronikova and ask her what she wanted us to do, or what she meant by a particular choice. Sadly this was not possible, as we marked the third anniversary of her death from breast cancer during the months when we were striving to bring this English version of The Sound of the Sundial to light.

Ultimately, we felt that it was incumbent upon us to take all of Hana’s original words into account. We decided to go back to the first version, and — keeping the second one always in our sights — effect an amalgamation of the two. As we have already noted, David Short’s translation was very thorough, and when we did make changes to his English, they were of a stylistic nature, relating to the literary experience of the reader, not to his undeniable skill. And since Short is British, his translation is naturally full of idioms which would not be native to the American reader; but we are an American press, and so we replaced these with equivalent American idioms wherever we found them.

We felt it was important to honor Hana’s decision to remove the chapters dealing directly with Anna Vanier’s husband, Pete, and his experiences in World War II. As it stands, there are a challenging number of narrative threads to follow, and these cut segments do not intersect materially with the remainder of the story. Pete Vanier still appears intermittently in Anna’s own narrative, and following the author’s lead, we kept those segments in the book. These deletions required us to re-number the novel’s other chapters, but we were also careful to preserve intact the brief segments without any numbers, whose headings—“Dusk,” “Midnight,” “Dawn,” and so on—mark the passage of that single day in which Daniel and Anna tell each other their respective stories. We believe these headings were meant to reflect the movements of the sundial itself, Hana’s playful little nod to her own preoccupation with time as an architectural element.

It is important to note that Czech is a conceptual language, and tenses in the original novel are often fluid. Short’s translation faithfully reflected this fluidity with frequent switches to a historic present—that is, a present-tense narrative that is unfolding in the past. But Hana’s temporal sleight-of-hand throughout the novel is already quite formidable, and we were concerned that such shifts of tense could disorient the reader of our far-more-concrete English beyond tolerability, so we rendered almost all of those passages into past tense; the only exceptions were the stream-of-consciousness flashbacks (all of which we set in italics) that seemed to call particularly for the immediacy of present tense. 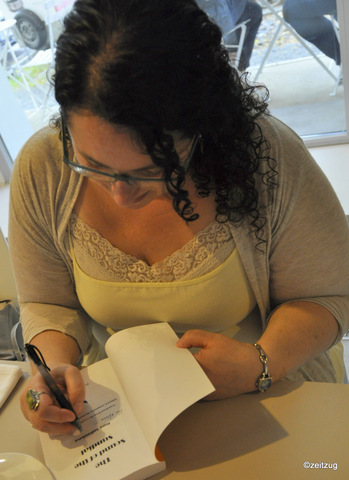 In the further interest of narrative flow, we sometimes interspersed sentences from the two editions in a single segment; at other times, we combined or deleted one of two nearly-identical phrases, if we were in strong agreement that the repetition was a reflection of the broad linguistic differences between Czech and English, rather than a stylistic choice of Hana’s that might otherwise be compromised. For the sake of clarity, we occasionally felt the need to transpose sentences or even entire paragraphs; but we always strove to preserve the author’s vision of the boundlessness of time and the capriciousness of memory.

Throughout this process of amalgamation, our esteem for Hana Andronikova’s extraordinary creation has continued to deepen. We invite you now to join us in reading The Sound of the Sundial and celebrating this love song to the range of human experience, with all of its suffering and cruelty and loss, and its moments of irrepressible joy.

PS: Together with Rachel, I visited in July 2015 Zlin, Andronikova's hometown. Milena Findeis

The Sound of the Sundial: Hana Andronikova’s classic at last in English translation

Any list of the top five Czech novels since the fall of communism should include The Sound of the Sundial by Hana Andronikova. This epic love story takes us from pre-war Czechoslovakia to India and then back into the maelstrom of Europe during World War Two, as the young Czech-German engineer Thomas and his Jewish wife Rachel are swept on the tide of twentieth-century history. Now for the first time this powerful and moving novel is available in English translation. David Vaughan spoke to Rachel Feingold, who edited and adapted the book for publication in the United States. 08/15/2015, Radio Prague International