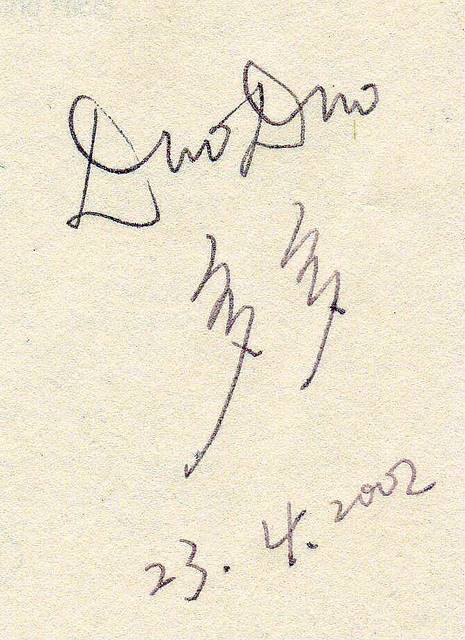 Duo Duo (Beijing,1951 - ) is the pen name of contemporary  Chinese poet, Li Shizheng, a prominent exponent of the "Misty" or "Obscure" school of modern Chinese poetry.” A major presence in Chinese poetry since his days with the “Obscure” poets of the 1970’s; a dissident whose crime was writing the poems he wanted to write; an exile, since Tiananmen Square, living in poetry’s internal exile; a former opera singer who compresses the grand passions into single lines; a Baroque poet of few words; a Beijing poet whose images seem to come from some remote and rural village; a political poet who makes no statements; a realist poet in alternate universe. Duo Duo is one of the mountains in the topographical map of contemporary world poetry, and it’s nearly scandalous that this excellent selection and and translation by this long-time collaborator, Gregory B. Lee, is the first American book.”
Eliot Weinberger, “The Boy Who Catches Wasps”, Zephyr Press, 2002

The instant the sound of the street cellist recollects
In the sky at dusk the last brilliant fleck of sunlight, is dying out
Dying over an old railroad station

A gray intestine opens wide in the sky
Outside it there is nothing
Except for a weight, still sitting atop the river’s surface
That was the weight of the church shimmering
Now, it seems there is only silence

After the sound of the cello there is only silence
Trees quietly change color
Children quietly drink their milk
The sand freighter quietly sails by
We watch, like tiles quietly watching a roof
We sniff, the air of when whoever and we were together
It’s already quietly died out

Whoever existed, is was only light displayed no more
Whoever left themselves, it was only an instant
Whoever said that instant was our whole life
And this instant, the sound of Scottish rain
Suddenly pattering on a basin —

1992, translated by  Gregory B. Lee, The Boy Who Catches Wasps: Selected Poems by Duo Duo 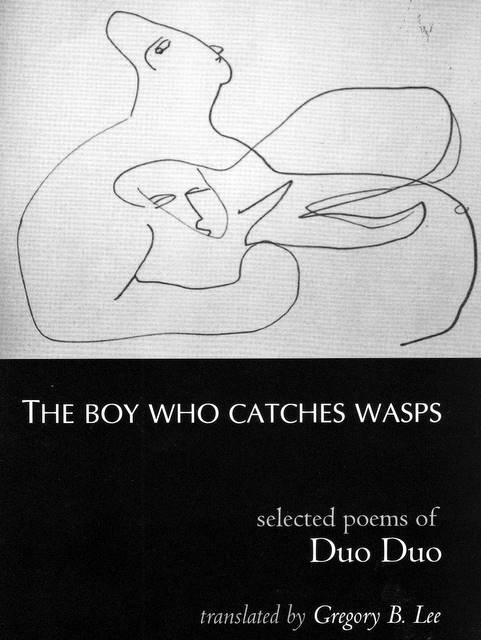 THE BOY WHO CATCHES WASPS

The boy who catches wasps enters from the left side of a painting
The call of the trees, has been intercepted by birds

“Little Mama, the calf in your belly has moved”
The blackest horse in the world gallops up

“Little Mama, the coffin comes from the south”
The trees are weighing, weighing the child’s head

1992, translated by Gregory B. Lee, The Boy Who Catches Wasps: Selected Poems by Duo Duo

Land has no boundary, railroad tracks no direction
Rejected by a dreamed-out dream
Stuffed into a shoebox
Controlled by a sort of lack of means of denouncing
In the time an insect takes to walk by
Those fearful of death increase their dependence on fear

Whatever you stare at you are forgotten by
Inhaling what it exhales, it bores into your smell
Staring upon the change before daybreak
You find the opportunity to turn into grass
Passing by trees grown by people
You forget everything

Nor will you stand by faith, only by the side of fabrication
When horses’ hooves no longer fabricate dictionaries
Ask your tongue to fabricate hornets no more
When wheat in fabrication matures, afterwards rots away
Would you please eat up that last plum in the nightingale's song
Eat it up, then leave the sound of winter on the branch

In weather such as this
Only fabrication advances

1992, translated by Gregory B. Lee, The Boy Who Catches Wasps: Selected Poems by Duo Duo

With Duo Duo and Hana Andronikova, we have been strolling through the streets of Prague in 2002,
later with Eliot Weinberger. Milena Findeis