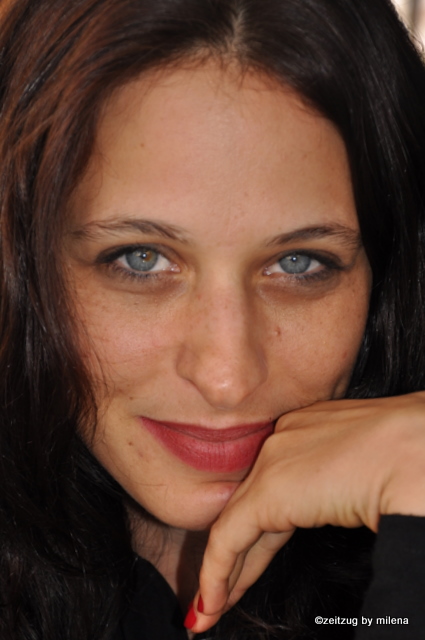 Was born in Rishon Letsion in 1976. She wrote her first poem (to her father) when she was six, and published her first poem in an anthology when she was fourteen.
Studied photography at Camera Obscura, theatre at beit zvi, painting at the arts academy and literature at Tel Aviv University. Master’s degree in Hebrew literature Ben Gurion University. Her writing has appeared in various literary journals and her first book of poetry “Nine Poems for Shmuel”, a journey of prayer for her dead father, was published in 2007. Her second book “Ash Whales” was published in 2010.
I met her in September 2011 in Czernowitz during the festival Meridian Czernowitz. Milena Findeis

To fall into your sea
And not to know
That this is your sea
To fall
And to feel endlessly seasick
You are the blue world
That I will never stop swimming in
Because there is no other way
Except to swim in this sea
With the tattooed whale
On your shoulder.
I don't know any other earth
Except the turquoise water
That drowns my head in your arm
And the whale is swimming in my flesh
And I was the flesh of your flesh
And we were a fruit bearing tree
Planted by stormy streams of water
My love,
The candles are burning on the Sabbath eve
We lit a fire
And we were lovers to the afternoon sun
On your bed
I was soaked with sun
And you told me that I am so soaked in sun.
And then I got pregnant and I was a whale
Large and distant
And by silence we were not touched
But an ocean was created.

Between the dark walls of the cabin
I heard a clear call to go out onto the invisible deck
There the sea breathe
And living water
Springing out of his voice
And I used to come to him
To read me
A poem
With only one verse
Each time
I passed a gate
Towards the garden of life
And waves melted all the death
Outside of the garden
And in that poem.

I wander tonight with a sweater from last century;
Soon it will fray and Rochester Minnesota will be far away.

And even if it were across the road,
You are no longer there, lying on your kingly bed and kept breathing
By your soul’s device and I can no longer hear the king’s voice,
Not through a sweater I bought for a dollar of tired love,

Because I thought I could wrap Salvation Army along my arms,
But you were cold, so I lay alongside; but then you asked that I descend from the bed
Before the nurse enters to see how a father and his daughter warm themselves at death’s face.

***
Now the last warmth I knew with you
Is tightly folded in the closet, on the top shelf,
The snow dissolved within its woolly strands.
Between two sleeves from the Salvation Army Store
We waited for deliverance, but that had folded into a different closet.

From the book “Nine Poems for Shmuel” translated by Jonathan Dayan

We were walking along the home front
Leaning at one another like houses tumbling down
In the narrow street the rain stopped and every man and dog drew far
At those days we were seeking the magic held by
Movies about dead artists
And we didn't read about the corpses in the papers.
We lived above the spice market, and the carpenter shops
Where business blew
And whoever caught a permanent parking spot got stubbed in the throat
Even at six in the morning, when the cold sun appeared
We turned to the wall and made love
With all the necessity needed for souls
Not silent yet.