A Bird Over the Dnieper 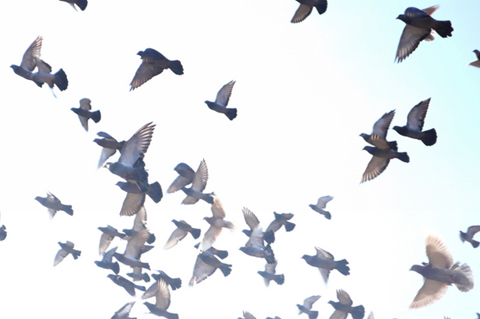 Elias Canetti, one of the last great Austrians, lived in London and wrote in German. In his study "Masse und Macht" (Crowds and Power, 1960), he wrote: "It is pointless to say there is no difference between nations and peoples".  Canetti adduced the following image for England: "How strong is the connection between English individualism and the attitude to the sea? An Englishman sees himself as the captain of his ship. Alongside the captain is a small crew, and all around the boundless sea. He is almost alone. The sea must be tamed. On the infinite surface of the sea, ships are as isolated as people."

Whether light- or heavy-handedly, Gogol provided us with the picture of Russia as a troika. The metaphor wraps up with a grandiose "…before it, peoples and states step aside." It's not entirely clear, however, why they should step aside. You can step aside from a royal cortege, or also when confronted by a thug brandishing a knife. It was Gogol I turned to in my search for an image of Ukraine: "…it's a rare bird that can fly to the middle of the Dnieper."  The Dnieper is the river of time, and a bird which has flown as far as the middle of the Dnieper hangs in the air and doesn't know what to do next. It's confused, it's at a loss. Where are we – in transit or trapped by the status quo? That kind of Gogolesque image.

Ukraine is a tabula rasa. This is both an advantage and a weakness. On the one hand, there is no historical foundation, no historical background as a state. On the other, the genes are still fresh and unspoiled. In contrast to the Russian big brother, its brains are not polio-stricken, so that maybe the bird will be able to make it to the far side. Everything is not quite fully articulated, coherent, finished. Nobody can carry anything through to its logical completion. The plotters didn't quite manage to poison the president. And the journalist Georgi Gongadze was killed because, I think, no such order was given: the order was not to kill him, but to scare him. Whatever we look at, we see it is crumbling, haphazard, amorphous. A stone loosed from a catapult should be aimed at the head. Instead, if it does fly, it goes into a void.

In a dictionary of international law you will find the term "displaced person." This referred, primarily, to the dispossessed who wandered around Europe in the closing months of the Second World War and its aftermath. The untold numbers of displaced persons is one of the tragedies of the 20th century. But if you apply this concept to history as a whole, then one has to speak of displaced peoples: Jews, Irish, Armenians, and so on.

For me, Ukrainians, too, belong to the category of displaced peoples. All, or most, of what has been accomplished by Ukrainians was done outside Ukraine, at least from the 17th to the 20th centuries.  I mean Ukrainians who were only able to fully realize their talent and purpose outside Ukraine. They made their contribution to other cultures. This was the fate of the Ukrainian people.

Nikolai (Mykola) Gogol was a displaced person twice over. His father, Vasyl, wrote in Ukrainian. Nikolay (Mykola) first transferred to Russian linguistic territory -- St. Petersburg, where he developed a loathing for the city and its people, then moved to Italy for eight years, during which time he wrote the first full-blooded Russian novel about Russia and gave it the eloquent title of "Dead Souls."

The Kyiv-born artist and sculptor Aleksandr Arkhipenko became a modernist classic in America. Those are just two examples. And then at the end of the 20th century, Ukrainians had the chance to stop being a displaced people, or displaced persons, and to link their destiny with Ukraine. Are contemporary Ukrainians making use of this opportunity? I hope that no Ukrainian poet will ever again have to write, as Taras Shevchenko did, "on our not native soil." But if they're not making use of it, they will have no one to blame but themselves.

Translated from Russian by Frank Williams