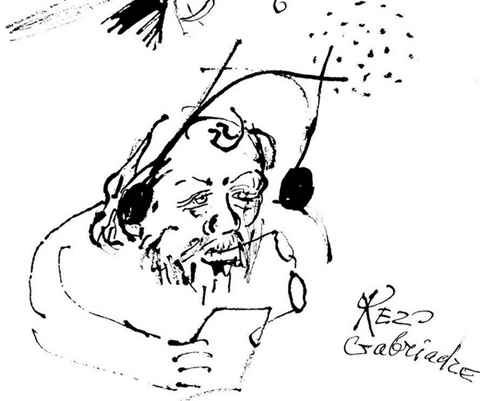 I've been a broadcaster for more than a quarter of a century, first for the BBC's Russian Service (Bush House) and then the Russian Service of Radio Free Europe/Radio Liberty (Munich, Prague). As a rule I'm surrounded by thinking, creative people.
Many of them are the flowers of their national culture: outstanding poets, directors, essayists. In "normal" countries a radio station is not the focus of such a gathering of "stars". But I was born in a country which does not count among the "normal". Alongside me are people from other "abnormal" countries, countries where freedom is severely restricted or even completely lacking. The result is that I am surrounded by historical losers, regardless of the personal success any of my colleagues may have achieved.

I now look with a feeling of deep nostalgia at the BBC and Radio Free Europe/Liberty foreign language broadcast services that come from the "normal" world. The first to go were the Hungarian, Pole and Czech Services, then the Estonians, Lithuanians and Latvians. The most recent departures were the Bulgarian and Romanian Services. I feel like a person who has had to repeat a class, no, repeat a century or maybe even a millennium. What saves me from depression is a language I have discovered and fallen in love with: the language of radio. In my trade I am concerned first and foremost with sounds and their sequence. Drama, dramatic effect is born on radio when sounds collide, rub noses, give each other a slap. Radio language is wider, richer, more full-bodied than any spoken tongue. With it you can convey ageing, erotic excitement, the approach of madness, dying. I have no interest in describing culture. But to create and blow culture like glass is thrilling. To me radio is an art. Radio and poetry live in the same element - air. So for more than a quarter of a century the ground under my feet has been the element of air. A free element.

©IGOR POMERANTSEV Translated from the Russian by Frank Williams

Farewell to Radio Liberty at Vinohradska - Prague 1, May 2009, Photo-Documentation by Zeitzug

Michael Petrou is the editor-in-chief of Open Canada, an online magazine about Canada’s place in the world.

I’ve never met Mr. Pomerantsev, but he seems familiar all the same. The Pomerantsevs fled the Soviet Union in the late 1970s and reached London, where Mr. Pomerantsev worked at BBC World Service – the source, while he was in the Soviet Union, of the assuring “This is London” introduction to newscasts, and an organization that took as holy its ethos of impartiality, fairness and accuracy.

Some two decades later, I, too, got a job at BBC World Service, then located in Bush House on the Strand. Amid the wrought-iron bannisters and chipped concrete stairs, I worked alongside a collection of Cold War refugees, Hungarians and Czechs and Poles, several of whom, like Mr. Pomerantsev, fled communism and sought to speak truth back to their home countries on the radio. They were joined by more recently arrived Afghans, Pakistanis and others, also broadcasting unfiltered news back home. They were members of an international tribe of journalists and, on some level, had become British, too. The young Kenyan who gave me a welcoming tour of the building pointed down a hall and told me told me, with the crisp mannerisms of an upper-class Englishman: “Through there is the pub. You know, in case you’d like to get pissed.”

Radio Free Europe was established to create similar “surrogate” free stations to broadcast to the Soviet satellites in Eastern Europe, such as Poland, Hungary and Czechoslovakia. Radio Liberty, for its part, broadcast directly to the Soviet Union. Both stations enjoyed great success from their home base in Munich. They merged in the ‘70s (leaving us with today’s relatively cumbersome acronym of “RFE/RL”). In 1995, at the invitation of then-Czech President Václav Havel, the combined radio moved its HQ from Munich to Prague.

Mark Baker: MY DAYS AT RADIO FREE EUROPE, May 2022