A BROADCASTER AND A POET 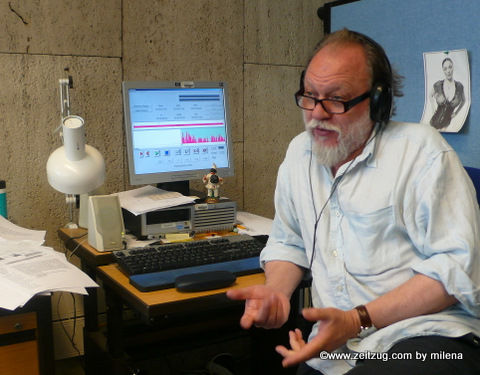 Igor Pomerantsev has been working for RFE/RL's Russian Service for 22 years. In addition to his work as a broadcaster, he has also authored more than 10 books -- including collections of poetry, essays, and "a pioneering book on wines in Russia." He has also written two books on radio, including "The World Service," which Igor describes as "about radio as a magic institution, with its mysteries, secrets, surrealistic connections of people with the air and the cosmos."
"I am a poet in different genres," Igor explains, "with the exception of novels."

His most recent book, "KGB and other poems..." was published in Ukraine. Igor describes the book as "a kind of lyrical cycle about the dense, grey, threatening atmosphere in Kiev in the 1970s." Igor fled Ukraine in 1978 for Germany, where he sought political asylum, later moving to London. "The originality of this book is that nobody writes about the atmosphere of fear, repression, KGB penetration, and secret agents of the 70s. One freely writes about the gulag, Holocaust, forced hunger in Ukraine, because [so many people] died, and the lack of survivors gives people a certain freedom to discuss the topics. But in the 70s, people lived, but they were all informing on their friends...it was demoralizing society."

"The originality of this book is that nobody writes about the atmosphere of fear, repression, KGB penetration, and secret agents of the 70s."

Igor believes that there has been a lack of artistic work dealing with the subject of repression by the secret police during the 1970s in Ukraine and Russia. "For instance, the Germans, Italians, and Spanish wrote a lot about the relationship between citizens and secret police -- hundreds of books and films. Russians and Ukrainians, however, are avoiding the 1970s because everybody feels guilty."

Igor says he chose not to name the villains in the book. "I name the heroes, the dissidents who died. Almost all the heroes in my books died. They were in camps, suffering, they couldn't be released."
Nevertheless, Igor also stresses that his book was not intended to be a political work. "I was working as a poet whose aims were artistic more than political," he says. "I just enjoyed writing it, and I hope the reader will enjoy it as well." 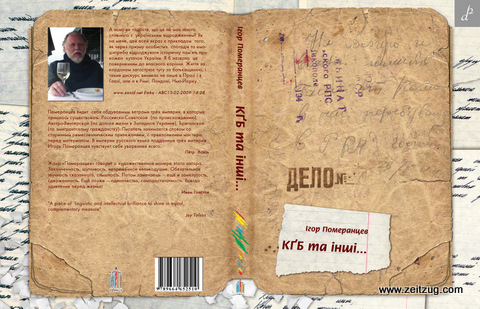 As for what inspired him to take on this difficult subject, Igor credits an inquiry by his adult son. "He once asked me what he could read about the 1970s, because he said 'you are telling all those nasty stories about KGB, investigations, friends arrested, and I would like to read more about it.' And I started thinking, and I realized that I couldn't think of anything, actually. So I wrote this book for him, because he wanted to know about the life of his parents and their friends. Now he can read it."

The book was translated and published in Ukraine, the Russian-language original is still sitting in a Russian publishing house. "I hope it is not a political climate that has prevented this book from being published [in Russia]," Igor says. "Even though KGB men are now the political elite in Russia, I hope that freedom of speech still exists when it comes to the printed word at least." Igor has been in constant contact with the publishers in Moscow, but says the process is dragging on and on -- though he's confident that it will be eventually published.

Igor's first book was published in London in 1985 (in Russian). Igor says he gave copies to travelers who he knew would be going to the Soviet Union so that it could be distributed there. "The thing was, it was just avant-garde prose, not really politically explosive," he says. "But everything is interpreted politically in an unfree country."

Profile with all publications: Igor Pomerantsev