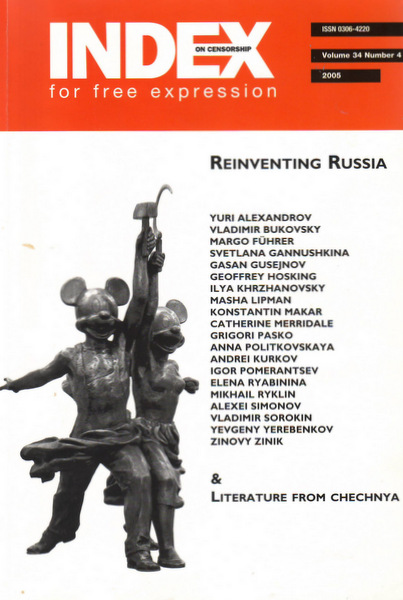 Published by Index on Censorship 4/2005

2005 London-based magazine Index on Censorship offered me to write an essay-forecast about Russia 2050. I accepted the offer with gratitude. Nowadays, in Russia the genre of  (anti) utopia is in fashion.  I am happy that my prognosis looks outdated and only proves my myopia. Prague, 8.3.2015 Igor Pomerantsev

A seminar on the theme “Are the Russians Europeans” has been held at Yasnaya Polyana, Tolstoy’s museum estate. The main subject of discussion was the new geopolitical reality and the Russians’ cultural and psychological sense of identity. But just how relevant the problem of Russians’ “Europeanness” in the light of the fact that under pressure from the North Sea, Holland and Belgium have had to be evacuated respectively to the Indonesian islands of Bintan and Batam and to the northern basin of the Congo (deserted following the extinction of the pygmies); the British Isles, including the Hebrides, Shetlands, Orkneys, etc.have lifted anchor and settled close to the western coast of Madeira; France has assumed the chairmanship of the Organisation of Islamic States; and Sweden,  following the nuclear suicide of North Korea, has accepted tens of millions of Korean refugees and become the largest Korean state?

Gustav, Prince (Murza) of Moscow, has issued a decree setting the Ukrainian language on an equal footing with Russian in the principality of Moscow. The Institute of Genetic Linguistics of the Western Hemisphere had earlier established that the Ukrainian language facilitates the production by the brain of the enzyme of tolerance and philanthropy. Scients believe that granting the English language official status in the principality of Moscow could result in psychological breakdown and lead to unpredictable consequences.

At the beginning of next year Gustav, Prince (Murza) of Moscow, will leave the Kremlin and move to the Arkhangelskoe estate, together with his court, stables and space fleet. A museum of Eastern and Western tyrannies will be opened in the Kremlin. Austro-Hungary, Galicia, Emilia-Romagna and the countries of the Chinese hemisphere have agreed to participate in establishing the museum. The most unusual exhibits in the future museum will include live Avarian eagles pecking out the eyes of unofficial carpet-weavers and woodcarvers, live boa constrictors crushing in their embraces wives of the Kalmyikan Khan who have been taken in adultery and a live 90-year-old informer from Polesie who shopped hundreds of Beorusan dissidents.The informer is sound of mind and his memory is good. 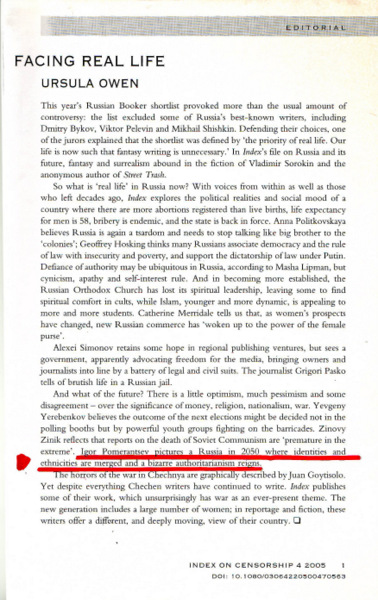 A traffic accident on the Earth-Venus highway involving a collision between a space taxi and an asteroid has resulted in the death of Abram Abromovich, the only man elected to the assembly (khural) on the principality of Moscow. Abramovich participated regularly in the principality IQ championships and was the only male citizen of Moscow capable of competing on equal terms with female Muscovites. He it was who persuaded the assembly(khural) and Prince (Murza) Gustav to reject a proposal from the Seythian-Ossetian Kingdom for supplying high-quality frozen sperm to Moscow and to accept a similar proposal from Judaea.

A square kilometre of the Ussuri taiga, together with its animals and black-fir, ash and elm plantations has been transplanted to an amusement complex in Moscow. Performed under cover of night, the transfer provoked protests from the ataman of Ussuri Cossack Army (a protectorate of the Kingdom of Japan). During the second weekend of this month, Muscovites armed with laser rifles hunted Amur tigers, gorals, Manchurian deer, sika deer, leopards and giant shrews. The children were particularly inventive. They shot the animals in time to popular rhythms and later danced beside their outstretched carcasses, dressed in serfs’ clothing and wearing Venetian masks made of paper-maché, leather and playing cards. Apparently also enjoying themselves with them were dwarves from the Ilmen Slav tribes and midgets from the Krivich and Chud tribes. Then, as the children drank hemp juice and ate poppy-seed pies, the little adults guzzled home-made birch-juice vodka and smoked grass. The prince’s guards did not interfere in what was going on and only helped with dissolving the remains of the animals in mobile chemical laboratories. When the festivities were completed, the section of taiga was returned to its former site, and the Ussuri Cossack Army agreed to accept a hundred thousand limited-range pocket atomic grenades as compensation for the moral damage it had suffered.

Prince (Murza) Gustav will play “the fat man in the white hat” (Pierre Bezukhov). For the three summer months, all the subjects of the principality will take part in a production of War and Peace. At least ten Natashas have been selected from among the finalists of the “Miss White Pillars” competition. Imertians and Vislyans from the Cracow province have been invited to play the parts of officers. An invitation to take part in the project has also been sent to the Catholic enclave of Bordeaux. The novel War and Peace has been identified by experts in psychiatry as “the most balanced work of literature that exists, restoring the individual’s sense of belonging humanity and involvement in history”. Leo Tolstoy’s epic is capable of restoring natural psychological functions, both unconscious and conscious. The project is intended to unite various social groups and castes emotionally and remind us the existence of “nation”, “people” and “motherland”. The concept of the present project draws on the magical rites of primeval human beings, and the mysteries of esoteric societies, the goals of which were moral cleansing, spiritual renewal ad the attainment of bliss in the life after death. The high point of the summer Tolstoyan games will be a scene involving the seriously wounded Andrey Bolkonsky. About 200 individuals playing the role will look up at the sky, cleared in advance of any clouds, and improvise monologues on the meaning of life. It will be possible to hear these monologues, either simultaneously or separately, at any point in the principality. The director respondable for the project is Princess (Murzinsha) Helga. The budget is 1 billion petrojats. 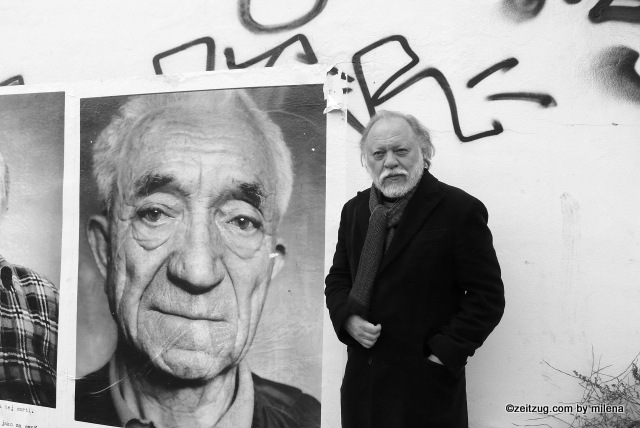 A decisive role in preserving the sovereignty of the principality of Moscow will be played by a new weapon invented by a group of biocyberneticists from the Kolomenskoe College for Women. On the borders with Yaroslavl, Vladimir and Smolensk principalities, it is proposed to install processors that will generate a thick, greenish fluid the moment any danger threatens. The stench of this fluid is produced from the regenerated cells from the dries penis of Grigory Rasputin, the whiskers of the Linnaeus bee flea (Pediculus apes) and the eggs of the fluffy anthophore (Anthophora pilipes). At the initial stage of development there was an escape of the new strategic substance, resulting in the mass evacuation of Muscovites into near-earth space for three months. Foreign experts are concerned that the penetration of new poison into the atmosphere might affect the process of mutation taking place in humans, animals and plants in the principality of Moscow.

A laser monument has been unveiled on Red Square to Filofei, a monk at one of the monasteries in Pskov who upheld the doctrine “Moscow is the third Rome” in the early sixteenth century.The doctrine declared that Rus was the final and eternal kingdom of the Orthodox world, and Moscow the heir of Ancient Rome and Constantinople. The ceremony was attended by all subjects of the principality of Moscow and Prince (Murza) Gustav. The general celebrations following the event continued for three days. The new monument will only be visible at night. During the daylight hours it has no form or volume.