When I was a boy I used to devour the books in the Amazing Travel Adventures series. I don't know who thought up the title, but it was spot on. I realized that later, when I became a serious traveler myself. None of my journeys went without an adventure, and all these adventures had an amazing happy end. But the process of reading was in itself a journey. I discovered not only China along with Marco Polo, but also fragrant words (“camphor”, “fennel”, “decomposition”, “jasmine”), case endings which the noun shed, like a lizard its tail. And once I discovered the ethereal subjunctive mood, I believed in God, or at least the God of language. 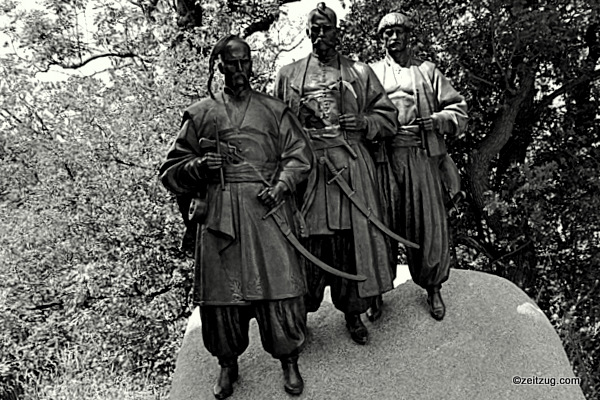 Out of all my reading, the prose of the young Gogol was the most fantastic. In my early childhood in Bukovina, that little slice of land trapped between Ukraine and Romania, I imagined that men's bagpipe trousers, as worn by the Hutsul, were the fashion throughout Ukraine. It was only when I read Gogol's Evenings on a Farm Near Dikanka that I figured the whole of left-bank Ukraine – young and old alike – wore baggy sharovary. These sharovary flew, like zeppelins, flew through the airspace of Gogol's night. Had Gogol been born and raised in Chernovtsy or Kolomyia, he would hardly have written prose with such lift, panache, such voluminous generosity. Open Evenings at random, and the air is filled with the fluttering, flapping, soaring, lashing of sharovary. Incidentally, if you look closer, perching, as 'Ginger' Panko from the Evenings advises, gig wheels on the end of your nose rather than spectacles, you will see that what is fluttering, flapping, soaring, lashing  is the night air pumping into a gargantuan pair of sharovary. But as Gogol puts his roots down deeper in Petersburg life, there is a decided change in his characters' attire. Sharovary, sheepskin jerkins, capes, wraps, long soft leather boots yield place to tails, topcoats, breeches and bootkins. Yes, bootkins, I'm serious. Gogol liked in-jokes, and he was indulging in one when he called his hero in The Overcoat Bashmachkin, or Bootkin. One of the characters in Sorochintsy Fair  is called Solopiy Cherevik. Solop is a borrowing from the French, so Dal', prince of Russian lexicographers, tells us, and refers to a old fashioned woman's coat. Chereviki is the word for the style of soft boot I just mentioned. In the Petersburg stories, the salop is swapped for the shinel', and Cherevik for Bootkin. Now that's an amazing travel adventure.