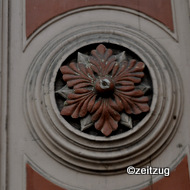 In September my heart changes into a chestnut, hard and glossy. The trees turn hazel-brown as you look at them. In this hard-boiled autumn air, under a random fire of conkers, under a sun-shower – I wince, I smile, though it feels like I'm wincing – of kisses – tuck your hand into the pocket of my raincoat, turn your collar up, it's blowing so hard at your back you turn into a sailing ship and your name is being written between inverted commas already, in this hard-boiled – don't be afraid, I'm here, with you, forever – the fluttering isn't coming from those flocks over there, flying obliquely, the chirruping not from these here, tumbling like fledglings, carmine, fragile as my grandmother in her last days before death – why did you bring me, mum? - I pressed against your thigh, above us a shaggy bulb fizzed, its coils clawing, why did you say “kiss your gran”? - cast me away like in a storm and crushed me against the cold keyboard-coloured tiling of the stove – then at the funeral you said it again, my legs rooted to the floor, “don't force him” - it was my auntie who'd travelled up specially interrupting - “Genna's a big lad, he's got the will and the courage, he'll find it in him to say goodbye to his gran” - how I hated that aunt, but before that even, recoiling – and the music was over – off the tiling, I left a used stamp on my gran's forehead – farewell, granny! - foliage - “one hand clapping” - you hear, my love, it's you and me they're applauding in the hard-boiled, it's for us carmine carapaces collide and strike sparks off each other, stand five minutes, while I dash to another season in my life, to unheated smoky repair shops where I stood at a lathe and when a woman came in – be it a timekeeper or a cleaner – all the lathe operators, turners and pattern-makers turned away from their turrets, spindles and grinders, forgot about their oily aprons and were deafened by the silence, I'll dash back – the welders will still remember me – and ask for the loan of a welding mask with dark smoked glass, because the trees are so very hazel, the carapaces strike and you are beautiful. 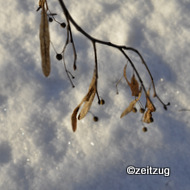 But you're looking at the snow already, and it goes white, they all start squinting and look away. At midnight in the light of the snowdrifts along neat streets my friend who wears glasses, panting, hat askew – impossible to set it straight – a radiogram in his arms, a huge one, he sways as he walks, throwing his legs wide, the radiogram crushes his chest, he's walking to my place while up in my room I'm getting close – we're waiting for him – to his fiancée, while he's coming to me, her cheekbones matt and angled, not Oksana – a herd of Oksanas, up to the fifth floor to my place each little step – each, please, turn out the snow or I'll go blind. All, tell all, no icebergs, no subtexts; through this narrow – a board lying on the grass nearby – crack in the fence we can squeeze into the garden, it's good this isn't a dream because in a dream I would be bound to get stuck in the crack, you'd crawl through, while I'd stick fast and when the pursuers, powerful, agile bumble-bees, come flying cheerfully up – round-eyed under mujahideen headgear – to my convulsed body, I'd wake – thank God, this isn't a dream, your hand in mine, I raise a small horseshoe magnet to a plump apple, hold the horseshoe by the tips, hooflets, where it's bare, hard against the sparkling mineral-water skin of the apple – a conspiracy!  The grown-ups have been leading us up the garden path yet again, apples don't contain iron, it's hanging there and never budged; let's go back to the gap and find a way through into the same garden once again, everybody's holding a sharp fragment of smoked glass, there's an eclipse of the sun today, doomsday, look, look, holding it by the very edge so as not to smudge the smoke, three boys and two girls stand with their heads tipped back, four have shards of glass, one – hands on hips – Fatmeatco, the general's son, has real dark glasses, but it's still better with the glass, better when they were holding the pieces over a candle flame and better now, but best of all after a hundred “thens”, when it wasn't a dark disc blotting out the sun – smile now, children: watch the birdie! - and we watched black thousand-year-old crows with splintered tails and extravagant burps – while my hand overshadowed your apple breast and the earth was covered in darkness. 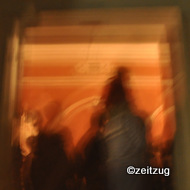 Towards morning the robins' beaks were chilled, Stefka the landlady's daughter ran outside to spend a penny and her heels answered the dew's cold question: “no, we feel fine”. No, we felt fine when we were all sitting together in the meadow, while the children and fish played in the stream nearby and wine trickled down your throat, you leant towards the lumpy tablecloth spread directly on the earth, took salt, straightened, your hair was left behind then caught up with your face and streamed forward – on the wind – up, to the side, you were laughing and the wine was intoxicated by the scent of your lips. Towards morning the robins' beaks were chilled, I was fighting Lodzya from next door – I thought: over Stefka's legs, straight as two rolls of paper, the brownest in Zaleshchiki – simply didn't know about you then – while my elder brother: freckled nose, like apricots in Stefka's garden: in winter his face gave off a July smell of hard, downy, bitter-sweet apricots – didn't separate us, watched how I would fare against Lodzya's flying fists.