Then we all stood up, the fish said goodbye to the children, the grown-ups folded the tablecloth, a child's wrist flicked a pebble three skips over the smooth river, walked in Indian file, out on the road donned sandals, brushing the sand off the soles, walked higgledy-piggledy, children sometimes behind, sometimes in front, apples of manure looked up from under our feet like tufted owls, we ended up side by side, latrines like bird boxes flapped their little wooden doors behind wattle hurdles, I gave you poems I brought from town about how the air grew hot when I was thinking of you and the thermometer on my bedside table burst, and the air grew hotter and hotter, a drop of mercury scuttled across the pale ceiling, all the thermometers in town burst and your son set a white acute-angled boat on the streams of mercury. I was carried away, first slowly, then suddenly, remembered neither doors nor entrance, ran straight out of nowhere in lilac – instead of bloomers – women's knickers, a black hat with ear flaps smelling of mothballs, felt boots with some kind of powder, sugar probably, in the distance two snowdrifts, a horizontal and a vertical, came together: sky and earth: one a shade greyer, the other a shade whiter, in the centre of the yard – a right angle: parallel bars – in the interstices between the bars the snowdrift of the sky, to the left ramshackle, huddled sheds, had hardly turned, Natasha, all in fur, appeared next to me, we walked in silence behind the sheds and there, in the cramped space between a stone wall and crumbling boards looked at each other for a long time, then touched cheeks and sprang apart, stopped, came together, without seconds, touched cheeks and only then understood these were cheeks, sprang apart, in the middle of the yard Yemelya – the ear flaps on his cap sticking out wildly – hauled himself up the bars with one hand for three roubles, somebody brought some carbide, they dug a hole, buried a tin can with the carbide and pee, sprinkled yellow dots over the snow, it grew warmer from somebody peeing into a tin behind the shed, scattering hot drops, then the tin exploded out of the ground and snow, shot up, it was a holiday, all the citizens of the city of Chita, only called that so that later in another town forty second graders could crowd around a new boy and then run off shouting “cheater, cheater”, spent the short magnesium summer in the park, the big wheels reared with hearts strapped into the seats, on some hill or other, on a level with the wheel as it looms into the sky stood a crepe de chine momma, a tusser poppa, dark-eyed, with inlets of baldness that merely emphasized his youth, and two boys in caps and knickerbockers, a bay bolete and a birch bolete, and hovering two steps away a photographer – a big smile, now, children! What did you achieve? - my brother asked me on arrival in Kiev. I stroked my beard, looked around my old unfamiliar room. 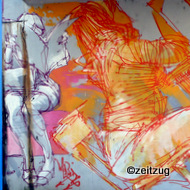 What did I achieve?  Well, I learned to walk on the sides of my feet. Nothing else. Well I never! When his wife's making the bed she puts out two pillows: one under the head, the other against the wall, so my brother doesn't drill through the brick and concrete with his red hot forehead in his sleep. I'd be ashamed to die: my brother would come for my body. The railway would refuse to transport me. My brother, would run around various manager's offices at the station, flushed and panting, shoving his red accreditation card at them, shout, but they wouldn't budge: then he'd phone Misha and Borya, the three of them would haul me out of the coffin, stuff a cap on my head and hoist me like a drunk onto the train while the other passengers sniggered, they'd get so carried away, be trying so hard, they'd forget I was dead and only my brother, blushing and breathing hard, would not be able to forget for a single moment that this carriage, this earth and this Universe had become the coffin of his only beloved, yes? I'd be ashamed to die. I rise from the table, walk over to another person's sideboard, find the thumb notch in the glass door, slide the glass open and take out two of another person's glasses. I go into the kitchen and rinse them thoroughly; now nobody will be coming to see me for sure. 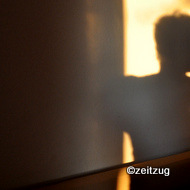 I'll call – the window's struck dumb, the curtains won't flap, the rain's frozen solid five hundred metres from the ground – shine, flap, freeze – window, curtain, rain – today not you, today: June in Truskavetz. On a starched sharp-edged curtain, with a face slashed by rain I fly into a damp pump-room smelling of decay and fungus, the windows shatter, hands let fall cups with long spouts for sucking up the Naftusya spa water, the queue disintegrates. I must hurry: mum's in the square with a man. Let me pass, let me pass, I only need half a cup, I'm just a boy, let children join the queue at the front or I'll shoot, there, splashed my shorts, back at the double. They talk so casually, leaning back slowly against the seat: here comes a word fluttering out of his mouth, it flies in an unimaginably high arc up and over to the plump lobe of mum's ear. And there from the razor slash of mum's, in close-up like in a phonetics drill book, red lips a sigh separates itself, returns for a moment, like a conker on an elastic band, and then leaps out again, shoots up, we lose sight of it, and falls again two days later into his confident hand on the same seat. Between their smiles there I am, a hypochondriac: the three of us together in a glade, outside town, mum takes off her blouse, the first nylon blouse in Truskavetz, with its black dots of buttons, the sun slashes the eyes, he unbuttons his white shirt and throws it smoothly onto the green grass, they look at me and laugh, this is what's called “sunbathing” - where are the red and blue taps, the shower head, the smooth tiles? - mum's sitting on bedclothes, her legs tucked underneath her, while he's walking around her on his hands, his face puce and wearing a strained smile, his trouser legs concertinaed up to his knees, his calves bared, cut off abruptly by the tops of his socks. 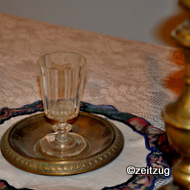 Amazing! Simply marvellous! And then from the other end of the glade a shriek suddenly bursts and dies, then a woman with dishevelled hair, dressed, but undressed all the same, skips from flower to flower, stoops to them, squeals and runs on, stoops again, slaps at her dress in the front, squeezes something – ah, a bee! - to her crimson thighs, squeals, mum struggles hastily into her blouse, we hurry away, while the man like a monument of stone, on his hands, head down, remains in this dense crimson haze slashed by cries, next to him dandelion launcher heads sway on spindly stalks, the abrasive abdomens of bees flit about him, and the madwoman with the dishevelled hair blots out the sun every now and then with her long skirt. Well now, your hand's already in my raincoat pocket. How dark it is, how boomy. This autumn is about you. You take off your ring of purest gold, the leaves burn, it rolls around the bedside table, a wisp of smoke like a cossack top-knot drifts towards the fence, to the sign on the gate “No Dogs Allowed”, let's pretend we're not brindled, let's walk along the avenue, stand all”yellomber”. 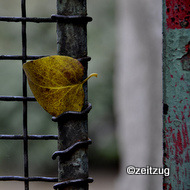 All “leaffall” - that's what they call these months in Ukraine – so as to catch the moment when the leaves change colour – as a lad I stood watch all night at the canaries' cage waiting for the chicks to hatch out – and we won't, because it's not the crowns change, but something happens inside us: the little crystals ice up, the cornea hardens, over there, by the ravine, the scientist's grave – he wanted to prolong our lives, thank the Lord nothing came of it, schoolgirls stuff their satchels with conkers – do, please, there's plenty, please, and give some to your little brothers and sisters at home when they hear your ring and come running to the door, let's go to the ravine, take your ring and ro...., tuck your numb hands under my armpits, the more bitter the cold, the more inflamed and red. You have a Chernovtsy face. All real people are born in Chernovtsy. This feast of vowels, these baroque intonations, these names are bunches of grapes: Mara, Izya, Fira, Shela, Ruva. I punch my ticket to the sound of the driver's voice: “This tram is for Chernovtsy only”.These sleek names and faces. Somebody scraped the tip of his finger to a point, lowered the needle onto a shiny black disk and from under the needle some heart-throb crooned: “Thanks, thanks for everything, thanks for being so beautiful...” And if the smooth cheek of a girl from the ninth grade didn't jerk away from your no doubt inexpert lips you thought it happiness. And if they came over with a smooth smile for the invitation waltz, you knew: there would never be a greater triumph than this. These girls were the first to vanish – who was waiting for them in Haifa, Nataniya, Jerusalem? I put the barrel of the revolver to the driver's head: “No Chernovtsy for you. You're staying in Kiev. I want to get off now, at Krepostnoy.” Two girls were whispering behind my back: “I saw my mum through the window, she's waiting at the stop for me, Marisha, I'm late already as it is, please, let's get off, mum's there waiting for me.” 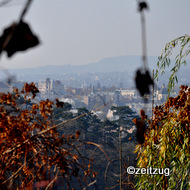 You have a Chernovtsy face. I will never be able to love other faces. Your mother was saying you have relatives in Chernovtsy. And they're dentists. What's their name, go on, do tell me! I'm frightened. Open the vent. Do you have lump sugar? I'm stifling. A jacket thrown on my naked back, I'm standing on a cement sixpence, on a saucer of a balcony. Somewhere high and soundlessly the souls of Christmas trees rumble like jet engines. Somebody drops on a parachute straight from heaven, a finger pressed to his lips. A neighbour's tousled head pokes from a fourth floor window: “Stop all that banging! That's all you can do, bang away all night!” It's not us. It's our hearts. It's us. We all loved each other the way animals do. If somebody hadn't been around for a while and suddenly showed up on the veranda steps, we yelled, we howled incoherently, in welcome, in joy, in celebration, we would feel them over with our hands, with our lips and only then begin asking questions. I grew up on kisses. Don't spare me if I kiss too little. I turn on the night-light and slump back on the pillow in horror: plump, sated bedbugs scatter scuttling across the blanket, up the wall. Touch them with a needle – like little girls' balloons on the May Day and Revolution Day parades – and they burst, plop and they're gone. The room's cold – the radiator's defunct. At night I wake with joy: I am alone! Don't waste a minute – keep in mind constantly and be glad that I am on my own. I dress hastily and sit at the table, because I am afraid to lie down on the bug roost.