UNTIL WE MEET IN THE "SANTA CRUZ" 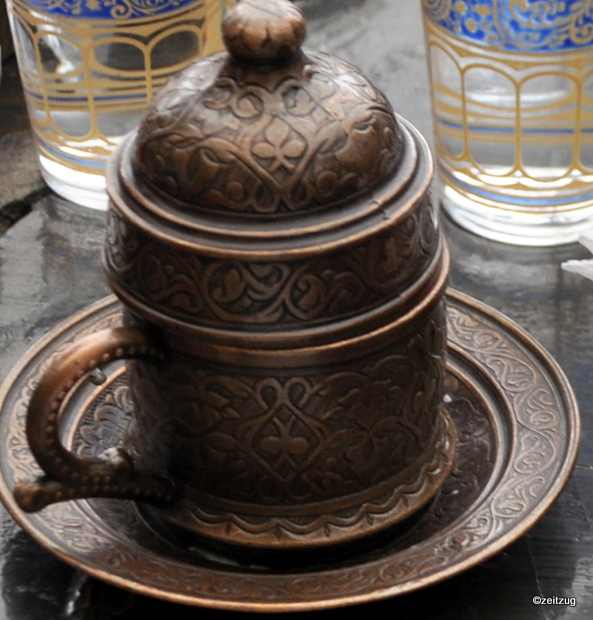 The image of coffee: eastern eternal time. If the Turks come to an end, they'll be picked up - have been picked up  - where they left off by their victims. One hand of the coffee house clock is timeless. An image with a thick, tasty residue.

A strong precise image – over and above scholarly classification – has the most direct relationship to life. Turkish coffee affirms the absence of time. In literary theoretical costestimates suppression of panic is metaphor; stroking of an animate or inanimate object - epithet; disinclination to die - enjambment.

There is no need in Munichor Bruges to seek out temples of beer – they find you themselves. The outpost of European coffee is Portugal. It's not been left with all that much, but what it has been, is very much its. The Cafe Brasiliera in Porto is, figuratively speaking, a cathedral of coffee. The Cafe Santa Cruz in Coimbra, a town of students, artisans and traders, is a cathedral in the literal sense: highceilings, vaulting, stained glass windows, servers ("Another cup of coffee, Ignacio!"). There was a monastery here before. Today the cafe occupies the south transept of the church. This is the place for discussing adowry, for chewing over the lottery this is the place. No, veritas is not just in vino. Everything connected with the heart is a cathedral. Beer weighs on your belly. Coffee blackens the pupils of your eyes. Wine swells your liver. Coffee inflames your wrist ("A restless night to you, senhor"). It's clear: no dreams for you. Just you and your heart tapping out messages to each other. It has something to tell you, remind you about. It’s called - the back of beyond. But as long as you're talking to your heart, you're the capital of the world. Except there's no need for everyone to be in the capital at once. There are other places to meet. So let’s do it, let’s fix up a party once or twice in the Cafe Santa Cruz – a perilous meeting with ourselves.