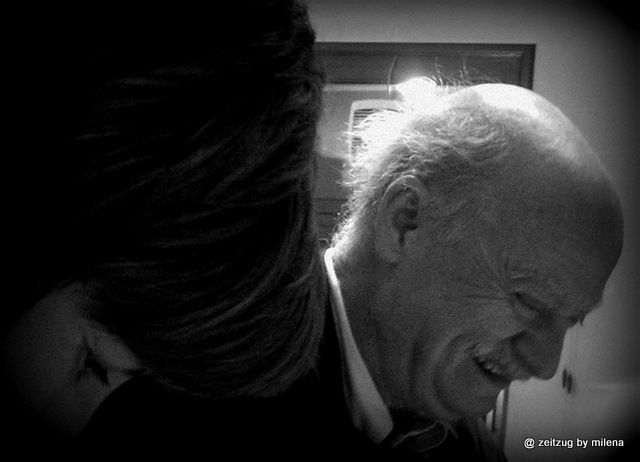 “Everything that man offers to himself is condemned to forgetfulness, except love which shines like a diamond.”

A founding member of the Scriptwriters’ Guild of Greece, Dimitris Nollas has co-written a numerous feature films, which include The Beekeeper, Absences, Scars of the Night, and Shores of Twilight. His novel I Dream of My Friends was described as “the most creative film adaptation of Modern Greek literature”.

Nollas’ most recent collections are The Man who Forgot Himself, Misty Windowpanes, The Old Enemy, and Leaves of Tobacco.

Dimitris Nollas lives in Athens, where he serves as the president of the National Book Center of Greece.

Intellectuals and the War

Goebbels was an intellectual. He is known to have said—: “Whenever I hear the word culture I reach for my gun.” Someone who is afraid of intellectuals can only be an intellectual himself. In other words, it is someone who has reflected on the condition of being an intellectual and is aware of what it means to be a thinking person. It is someone who is not just an onlooker of events nor does he swallow authority’s arguments whole—he is an extremely dangerous person—someone deserving to become a target for Goebbels.

When an intellectual is in favour of war, he is well aware of the  situation. He has a clear view about what should be done and how it should be done. He is convinced of the corrective role of the war and is already thinking in tune with its rationale. This, however, is not my job.

My job is to constantly ask myself what and how something happens, to investigate it, to seek to find out whether it gives satisfactory answers to the questions why and how. And to constantly ask myself, discuss it and ask others as well. Up to a point. Obviously, I was not born to save the world. But—distancing myself from authority, while at the same time being critical—I can preserve an essential quality in myself.

It is wise to start with self-evident truths. This is a sign that we may reach an understanding between us, based on common ground. This is helpful, especially when people meet for the first time.

Let me digress. One should take it for granted that a general or a minister can and must be an intellectual in the same way that a writer is an intellectual, since his work is a product of thinking and therefore meaningful. Similarly, a general or minister has bestowed meaning to the disaster that a war may cause. They have considered the reactions, have weighed the advantages against the disadvantages, usually on a scale the one pan of which overflows with blood and pain and the other with securities and shares. National colours, paeans and human rights decorate both sides of the scale and usually change sides quite easily. It all depends on how well the matter has been thought out by the generals and their equally intellectual ministers. And by the intellectuals proper, too.

Just the fact that in the twentieth century the part of the state apparatus which aims at the quashing of opponents and the acquisition of new resources has been renamed from Ministry of War to Ministry of National Defence proves that these are thinking people, that they are intellectuals. So much for doubting that Clinton, Clark, Albright and Solana are intellectuals. End of digression.

Because Pinter and Blair are both intellectuals, I would like to talk about the intellectuals who are writers and the war. And, to be honest with you, I can hardly talk about all writers even under this much narrower title of my commentary.

I could not even talk of those of my personal circle of acquaintances. And, to pick up my train of thought, I admit that I would find it difficult to talk about war as some perennial evil that takes human lives and devastates forests and fields. I believe that wars will never stop and the tragedy of thinking people (at least part of the intellectuals) is that they will be fighting against war without ever being able to wipe it out.

Nevertheless, it is this Sisyphean struggle that makes a difference. Being doomed to fight against death often at the cost of your own life. Being human is something you have to pay for every day and earn it, as the great German poet put it.

It was a short while ago and next to us that a whole people paid a price (we do not even know how much longer they are to pay) for their failure to comply with the recommendations about how to run their own home, and so one may ponder on certain questions that arose during this war. I am not going to refer to the causes, nor am I going to judge those who supported it. I am only going to talk about two issues that emerged during the war in question and made me reflect. The first was the almost universal support of the victims of the invasion by the Greek people, and the second was the attitude of the intellectuals in the Western world.

The manner in which Western societies, led by their intellectuals, have not only encouraged the elimination of the “bloodthirsty Serbs”, but also the manner in which they dealt with everybody else—all of us who were against the war—verged on a fiercely cannibalistic racism. I do not wish to give examples; these events are too fresh and I am one of those people who, though not inclined to forget, are well aware that justice is not something you can carry with you and use it as a threat against those who may have wronged you and are now acting dumb.

The victim’s right is not yours for ever, if you do not learn to tolerate and forget. That is why the repetition of the statements of Mr. So-and-So and Mr. Such-and-Such during the war seems to me pointless. It is here, in this land and in the Greek language that Aeschylus’s tragedy The Persians was presented—taught—and we have learnt our lesson. One needs to be careful since one is greatly tempted to adopt a highly arrogant, conceited and vengeful attitude “on the grounds of justice”. And it is at this point that justice is lost, vanishes into thin air, crosses over to the other side and you cannot claim it back.

This attitude which I called fiercely cannibalistic earlier on, despite having promised myself to avoid epithets, made me wonder whether in fact we might embody something really evil in the eyes of the Western intelligentsia. By this I mean, of course, those intellectuals whose views were given prominence in many ways by the media and other power structures rendering them dominant. Is it possible that we are their nightmare? And if so, what could we do about it without betraying ourselves? Namely, if we insist on a different view of life and a way of our own without excluding theirs (how could we after all?) what will happen? Will they crush us so that they can sleep untroubled and do whatever they like not only to themselves but also to us? Why do we tolerate them? Why can’t they tolerate us? Our differences are clearly visible even to a blind person. However, the same is true in the case of so many and so different cultures all over the world. Is this a reason for rejecting the other?

The arrogance of the Western people is a given fact long known. It is the arrogance of an organized and technologically better equipped society which has placed the individual and his rights in its center. We, on the other hand, despite the fact that our priorities have to do with the importance of a community with which individuals are firmly tied up, have often adopted their ways, and even now we still copy their behavior, habits and tastes. Even in this, however, our attitude seems to be eclectic, and, at any rate, far from an unconditional surrender.

It seems that this is not enough for them. Judging by their reactions to our opposition to this war, they would like our full compliance. And it is at this point that the demon makes his appearance and asks “Why are they so upset, given that there is space for all of us?” And since he does not get a satisfactory answer, the demon goes on “Could it be that our spirit as expressed in our every day life, is qualitatively superior to theirs and it sets off a process of aggressive rejection in them?” These are difficult questions to answer.

Yet, all these Greeks who cannot easily afford to reflect on the issue, since they are troubled by another kind of problems, those of every day survival, responded with an absolute opposition to the undeclared war against Serbia. How is it that all those people agree on the matter in question, while they are usually divided even on the question of who will govern them? How is it that people so different from one another, people who tend to suffer from an incurable intolerance as it is manifested in the way we deal with one another at home, at work, in the street, at school – how is it that we are unanimously against this particular war?

I wonder whether such crucial issues stir up in us a spirit of revolt and disobedience such as the one that prompted our fathers to take up arms in order to set free or to defend our homeland, even though the venture seemed doomed. I also wonder whether this attitude has continuity as in the case of the Greek language, and whether perhaps with time it has become a formative experience. It might be that we cannot help it. In today’s world, however, a world that is oriented towards a global fraternity, there is no place for this kind of partial alliances. They cost too much and one has to be wary. It appears that such was the kind of price that the Serbs had to pay. I can’t help thinking that perhaps the deeper intention of certain Greek intellectuals -let us say those few who supported the NATO invasion of Serbia---was to save us the cost of such a unanimously negative attitude towards the decisions of the almighty West.

In closing this short commentary, I stop wondering and behaving like the intellectual I described at the beginning of my text, reflecting that however unfair and hideous it may be, you can only die once and therefore you have the right to choose the way. And it is here that I recall our own poet speaking of the Greeks—: “who were the first in this world to turn the fear of death into a flair for life”.