The Fine Arts as a Documentation of Inspiration
Essay by the visual artist Johan H. Benthin describing the creative process leading to his artistic works. 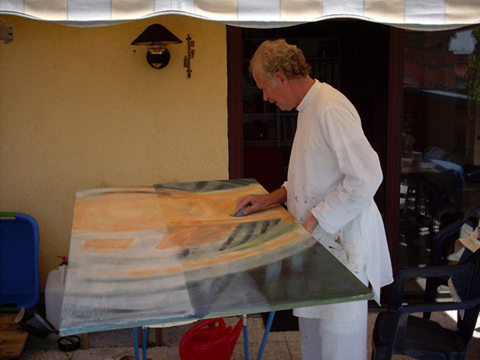 I am often, by art-students, collectors, and other art-lovers been asked questions like:„How do you go about making your art works? “ – „How do you develop your ideas?“ – „How can I learn to understand ‚the modern art’ you create?“ – „Do you have any general steps in your creative process?“

Like so many other general questions they are fair enough; but demands quite specific answers. Though words are known to be poor, we are still richer having the use of them than we would have been without; but it will involve that I am approaching mind-sets without sufficient verbal labels. Simultaneously I shall avoid terminologies from ‚the inner-circle’, as they seem to be designed to exclude rather to include - and are thus not always profitable for the understanding of the subject.

Not at all an easy task, either for me writing, nor for you reading. Even when we have a common frame of reference, it demands an unusual development of thinking-patterns of an allegorical- as well as of a suggestive nature. As a visual support I have chosen a ‚think-model’ in the form of a poly-dimensional-image. Not unlike the one sometimes used in the field of psychology. 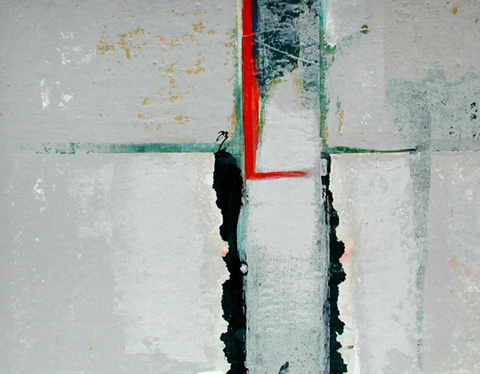 Let me name the first level of this model „The horizontal“. On this level I am only able to move back and forth along a line. One thing can be developed into another along a straight line of action.

For me this stands for e.g. that a new medium or method might be developed based on a previously acquired procedure. Or I can move back (along the same line) to former methods of craftsmanship, according to the demand of the actual art-work.

The next level would then be „The vertical“.  This second dimension might in crossing the first one give the possibility of new insights.

Here it is obvious that the artist should develop the capacity to look beneath himself, to be able to refer to and utilize the art-historical events preceding his own time. But at the same time it is expected that he has the courage to look above, being able to estimate trends.

On this level I personally prefer to seek my themes inspired by e.g. experiences from the development of the society, the interactions immerging in cultural environments, from the field of psychology, myths, or religion. The use of a symbolic form would here be a natural choice; but as soon as chosen; it will show its limitations in the fact that the recipients would have to be capable of following the chosen symbolism.

I seldom choose this option. I rather prefer to create a pictogram that will represent more general artistic values; being based on form, colour and other painterly values.

„The perspective“ is then the third of our known dimension given to the model.  I am not referring to the representational art-works (picturing recognizable objects), as they will be using the illusion of a perspective (suggesting a dimension not available on the two-dimensional picture surface). I am using the phrase ‚perspective’ more in the sense of a paradigm, to acquire a better perception of an added dimension to the think-model.

Let me clarify with a metaphor. We receive information from several watchtowers, placed on strategically good positions in the landscape, and hereby receive more correct information about the landscape than a single angle of view would provide (from the standpoint of the previous known horizontal or vertical levels). A number of references from an added dimension (the towers) can provide us with surprisingly many new angles of view. 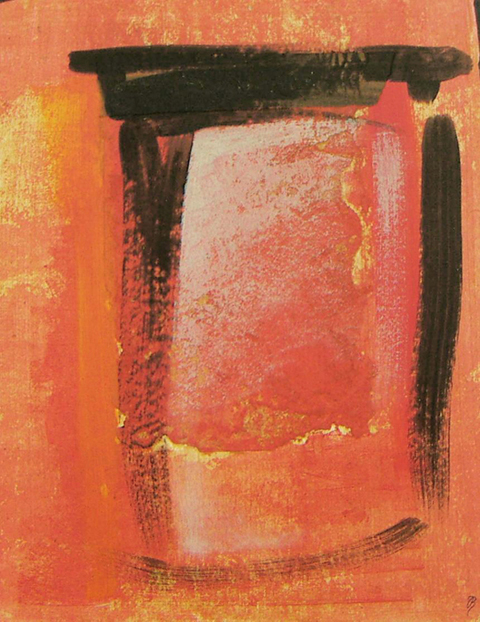 I tend to believe that my personal morally-based values are functioning as a number of towers, adding a dimension, helping me to monitor the artistic landscape before me. These will enlarge my number of choices enormously; and like with all choices the consequences are obligatory attachments; and morals therefore the restricting code that can safeguard us.

Good art-works are always inspired; the question is only from where? That is where the choice of the spectator must be activated too.

Now the think-model will get its dimension number four: „The time“.

According to Albert Einstein and Steven Hawking, we should be able to perceive this dimension; but naturally not with our conventional modus operandi provided by our standard sensory mechanism. We have to seek other paths to reach facilities which might provide us with the necessary information.

As I have tried to get on friendly terms with the time-dimension-concept I have naturally tried to learn what this dimension is asking of me as an artist.

It was easier than one should presume; I simply had to learn to be able to perceive with more than my standard-senses. It sounds like a Zen-koan; - and if you prefer it, you may take it as such.

Let me elaborate with another metaphor (within the spirit of Zen).

Like some others individuals, artists are ordained with a sense to detect some of the hibernating potentials we carry within us. 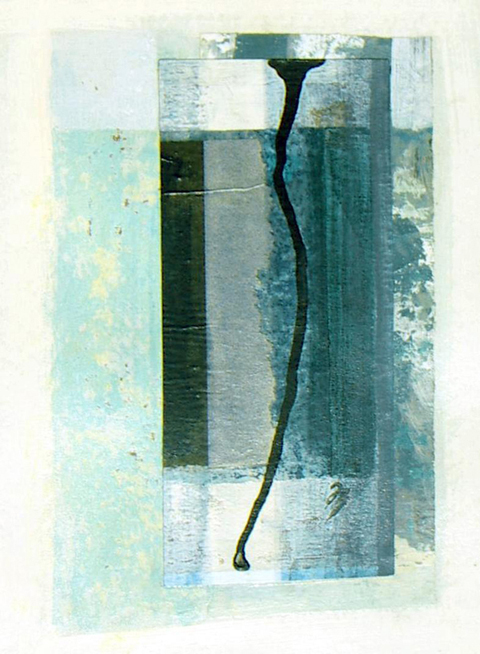 The fifth attribute to the think-model would be: „The dimension of light“. Most of the things we visually perceive in our environment are ‚in existence’ because we are made aware of their existence through their reflections of the light. Switch off the light, and the things we like to live with, are transferred into stumbling-blocks.

The light is an active force, with the capacity to dissolve darkness. Darkness on the other hand cannot dissolve light. Darkness is passive, and can only be defined as the absence of light.

But it is a known (and trivial fact) that what we see with our physical eye is not only related to the object before us; but is to a great part being influenced by our own limited capacity of perceiving an object-related concept. I must therefore accept that what my intellect, as well as my emotional capacities, are willing to consume, - is the ultimate limit of my present level of understanding.  I was just talking about some of the capacities of the physical light. Let me now refer to some similar capacities of the more refined light that is enlightening the spirit; where I am obviously just as limited to perceive, and therefore restricted to what I am able to relate to.

Unless I accept what (this finer light) is presenting as being facts – and accepts them as such, I should not have the necessary development. With a religious-based term we would call this phenomenon: Faith. In the moment this light will descend upon an idea (in the sense Plato used this word) it also instantly becomes an actual reality wrapped in a related environment. As a result the clarification as well as value of the idea seems instantly to be established as a fact. These are the instances where the dimension of light has literally enlightened my soul.

Now let me head for a winding-up-summary or attempt a conclusion.

If I start creating an art-work in the academically established tradition, I would start with the first two levels. Having this way covered the ground of the outward dimensions of our think-model (the craftsmanship as well as the historically related items including trends); we should theoretically be able to proceed to the next three levels. Having tried this approach countless times – but without much success; I feel like a petitioner must feel in front of a large bureaurocratic-administration-pyramid. It will hardly function to move from the bottom to the top. I have realized that in my artistic work, it is indeed also much more promising to move from top to bottom.

Accordingly I start my art-works from above with the inward-dimensions. First (the 5th. dimension) the vision bestowed by the eye-opening-light, then follows (the 4th. dimension) the attempt to wake up some of the hibernating capacities or talents vested in me. The moral issues (the 3rd. dimension) are involved in the constant ongoing process of selection.

After exercising these activities, which actually do not take place on the canvas, the outward-dimensions will be involved.

They are the first two dimensions in our think-model and will involve some real physical happenings taking place on the canvas. The subject is very closely related to our historical background (the 2nd. dimension), and there will hardly be any artist who totally would be able to act out of his art-historical environment. The involvement of old or new methods (the 1st. dimension) would show in the application of colors, composition, or of texture, ductus (or other tactile facilities) according to what will give optimal support to the idea of the art-work.

It is my experience that the intensity of the message of a given art-work will, by the sensitive spectator hit with an enlarged impact, if he or she will allow themselves to be influenced by the interactions of the five levels symbolized on the think-model.

The value of an art-work can be subject to endless discussions; but the real value is when it is used as a catalyst and causing great and valuable insights. And as there is no sight without light, insights are included. And if there is light, we might be able to make out the source.

So let me conclude with a few quotes from the Doctrine and Covenants (one of the books, considered by the members of the Church of Jesus Christ of Latter-Day Saints to be of divine origin).

“And the light which shineth, which giveth you light, is through him who enlightenth your eyes, which is the same light that quickeneth your understandings;
Which light proceedeth forth from the presence of God to fill the immensity of space—
“And if your eye be single to my glory, your whole bodies shall be filled with light, and there shall be no darkness in you; and that body which is filled with light comprehendeth all things.” [D&C 88:67] 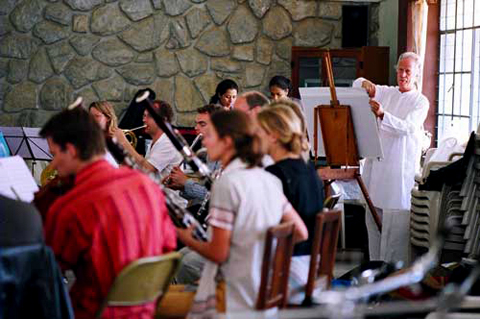 The art-activities in short: ‘Modern Fine Arts’ mostly on canvas, but occasionally also in form of: Murals, Relief, Sculptures, assemblages, installations, etc. JHB was born in Denmark in 1936 and also raised and educated in Scandinavia. Later he was given many international public commissions, so his art is well represented in public and private collections in a number of countries; wherefore he also has been given several international awards and grants. Besides being an active freelance visual artist, he is a much sought for lecturer on art. Through the last many years he has divided his studio-work and other art related activities between Europe and India. He passed away in Mysore in June 2006 after a short illness.