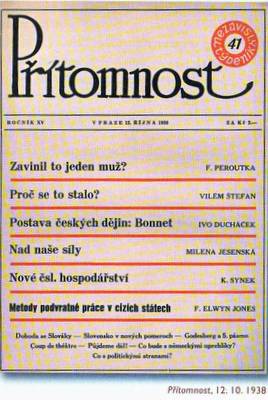 This week is the 60th anniversary of the death of one of the great figures of 20th century Czech journalism, Milena Jesenska, whose writings offer today's readers deep insights into Czechoslovakia between the wars. My colleague David Vaughan has taken a particular interest in her work. David, what is Milena Jesenska most remembered for?

"From the point of view of posterity she has the misfortune of having been Franz Kafka's last love, and that's what most people know her for. Although they only met twice, just before Kafka's death - she was one of his first translators from German into Czech - they had a fascinating and passionate correspondence, which was given extra fire by the fact that they had both grown up in the shadow of very dominant fathers. But Jesenska deserves to be remembered for a great deal more."

So what was her contribution to the cultural and literary life of the time?

"She was very much part of the left-wing avant-garde of the 20s and 30s, and at the time she had a quite tempestuous and very bohemian marriage with the avant-garde architect Jaromir Krejcar - there's a wonderful description somewhere of her bedroom - they rejected the 'bourgeois' idea of the marital bedroom - her room had just bare white walls and a mattress, and a rather small reproduction of Van Gogh's sunflowers on the wall. At the time she was writing articles that were fascinating in that they put the political life of the time into a very concrete social context - in that way they were very modern - and they also challenged stereotypes about the role of women at the time."

And she was writing at a time of political turmoil.

"Milena Jesenska was always a political writer, although in the 1930s she rejected communism, after learning of the excesses of Stalinist Russia. I think her very best writings are a series of articles that she wrote from the mainly German-speaking borderlands - the Sudetenland - just before and after Hitler marched in in 1938. At a time of great hysteria, these are incredibly humane and balanced articles, for example she did not forget to point to the suffering of non-fascist Sudeten Germans as well as Czechs after the occupation. I can't think of anything else I've read about the period that sheds such profound light onto the tragedy of the time."

Her outspokenness eventually cost Jesenska her life, didn't it?

"Yes, during the Nazi occupation she was active in the resistance, and was sent to the Ravensbruck concentration camp. It's interesting that while she was there, she won a huge amount of respect from her fellow prisoners - because of her willingness to put other prisoners' interests before her own, something that seemed to characterize her throughout her life. She died in Ravensbruck from typhus in May 1944, still in her late forties."