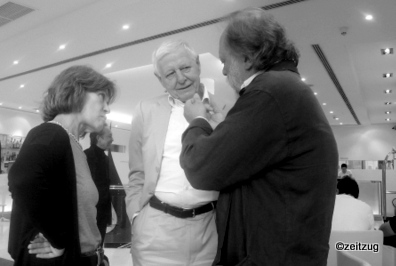 Michael March: You've experienced the onset of the slaughter and destruction of Europe living in Nürnberg as a child. Tell us a little bit about your childhood experiences.

Hans Magnus Enzensberger: Probably everybody is marked to some degree by their historical experiences and mine, of course, was growing up in Nazi Germany, during the Second World War, the aftermath of the war. I was a child at the end of the war, I was seventeen, and that leaves a sort of indelible mark. Though I do not envy the young people who grew up in post-war times, in times of economic well-being, because this kind of experience gives you a background, some dimension, which is inexplicable.

MM: Is that why you became a poet?

HME: It's very hard to say how you become a poet. It's probably something to do with language first of all, the kind of thing which reverberates in your head. You develop a taste for phrases, for metaphors, for verse, for rhythm, and so on. It's a natural process, it's not an ambition, you don't plan to be a poet. In some respects it's a vice, like an alcoholic who starts drinking. He doesn't quite realize what it means, what it implies, he just starts to have a drink, and so you start to write a verse or a few verses and after a while you discover that you cannot very well leave it alone. So it is more than a habit, certainly. I couldn't leave it alone, that's all.

MM: Joseph Roth said that man is a puzzle and above all it's impossible to help him. Would you agree?

HME: I can help a person in a modest way, but I don't think I can help mankind.

MM: Can your words help?

HME: It's not for me to say. If somebody is helped by literature, it's by chance. I don't like to make great claims for what we are doing. A lot of nonsense has been made of poets who became the voice of the fatherland, the prophets, the great seers, the collective unconscious, fathers of the fatherland and so on. That's not a role I would like to take on.

MM: Yet you're a poet. Do you see your poems as political poems?

HME: You see, I dislike the notion of the poet as specialist. In the nineteenth century there used to be the idea that the poet is a specialist in emotion, in feelings, in sentimentality, in nature. And then there's the specialist in politics, who is a socially engaged poet - the man who is on the tribune, talking to the masses. I personally don't like these specializations. A poet is an omnivore. I don't want to be a specialist.

MM: What about the social responsibility of a writer? Joseph Roth wrote that he could die for the masses, but not live with them.

HME: (laughter) l don't think you can decide to be a moral person. It's not an act of will. Artists, poets, philosophers, intellectuals are not morally superior. The record of the intelligentsia in the twentieth century gives good ground for suspicion - it's a terrible record infused with collaboration in the service of communism and fascism. So let's not make claims for our moral superiority. There's no ground for that.

MM: As a distinguished editor, which of the post-war poets do you find important for yourself?

HME: I wouldn't like to make a hit-list, because the habit of making lists is a bit presumptuous. I was never an avant-garde poet, though I respect the historical avant-garde of 1910. The poets who are important for me are a very mixed lot: Catullus, for example, John Donne, and César Vallejo. I always pick something up when I can use it. In some sense, artists and poets are egoists because their criterion is not what is objectively good or important, but what is useful.

MM: Your work has been tremendously controversial.

HME: Oh, yes, that's normal, that's how it should be, I should hope so. It's a sign of vitality. I would be disappointed if there were a lukewarm, benevolent indifference. I wouldn't want that.

MM: How do you view the world after Germany's most recent defeat?

HME: When I was seventeen or eighteen, Germans were the pariahs of the world. You could hardly go abroad, you did not have a passport, you were, morally speaking, an object of contempt. A German was the bad guy. And I don't know how it came about, but certainly the Germans had a lot of historical luck, because the peace which was made between the Western allies and the Germans was a very intelligent peace, unlike Versailles after the First World War. But of course, we didn't have the good heart of the allies to thank, we had the Russians to thank. Because of the Russians West Germany was put on its feet again, for strategic reasons. Still, it was a very remarkable and farsighted peace which we were granted. The Western allies virtually forced democracy upon us. The real sensation is that it worked. Germany became an inhabitable place, and to that extent it was a success story. Now of course, this story is at its end.

MM: The miracle has moved east, with the impending imposition of democracy in Iraq and the Arab world.

HME: Yes, under much more difficult circumstances. Nobody knows how this is going to work out, and it's also a question whether you can apply the same pattern to all sorts of civilizations. At this point I would like to include a list of all the things that I am not: I'm not a sociologist, I'm not a political scientist, I'm not a philosopher, I'm not a prophet, I'm not a futurologist.

MM: But you knew enough to support the ousting of Saddam Hussein. Why has this caused such a furore in Germany?

HME: I'm not quite sure about the reasons, but there is, of course, a pacifist tradition in Western Germany due to two world wars, when the Germans were roundly beaten, perhaps for their own good. The military does not have a high standing in society. That's part of the explanation. Another part is our relationship to the United States which is very complicated, very ambiguous, ambivalent you might say. There is sympathy, but there is also dislike for America in the world.

As far for myself, I have one overriding political passion - my hatred of dictators. Dictators are the worst criminals in the world. I rejoice in the downfall of any dictator. This is a visceral reaction. It's a wonderful moment to see a statue of Stalin crushing down! A moment of real joy.

Still, all things being said, I am not a defender of American foreign policy, nor am I claiming that the United States should not obey the rules of international law, and I'm not saying that the lies which were involved in this operation by Mr. Bush were not lies. The only thing I maintain is that if a bastard like Saddam Hussein disappears it's all to the good. That's all I'm saying.

MM: It's a personal joy.

HME: Yes, it's a personal joy, but it's also based on experience. I would not be alive if the Allies had not made an end to Hitler.

HME: I would not have been tolerated. I would have been done away with.

MM: Are we not drifting back to Roth's time, to the fall of empires, to the disintegration of Europe?

HME: The old empires were territorial empires. This is a new kind of empire, the American Empire. They don't need to annex places, they don't have colonies. They annex the economy, while remaining isolationists.

Sometimes I feel sorry for the Americans, because to be number one is not a blessing. Whatever you do is wrong. When you intervene, you are an imperialist, when you don't intervene, as in Rwanda, then you are not doing your job. I'm happy that we are not a great power in Europe, it's much better. Who wants to be number one? The Germans have tried once and failed! No, thank you very much.

MM: Why not feel sorry for the European Union, whose present expansion represents a form of egotism, if not insanity.

HME: The world of Yalta has gone, and that's all to the good. I feel very close to the Hungarians, I feel very close to the Poles, I don't mind them coming in. What bothers me, to put it crudely, is the lack of democracy involved in this whole construction. Brussels is a bureaucracy; it's a kind of politburo that meets behind closed doors. That's what bothers me. Not the Poles, not the Czechs, not the Hungarians.

MM: What bothers me is the thirst for a European army.

HME: No chance at all.

MM: So we can rest easy.

HME: Well, in that respect. We have other problems to think about.

HME: Once I was asked to give an account of the International Monetary Fund. I went to Washington, and only after meeting these people and smelling them, going into their buildings and watching them work could I express a kind of reasoned opinion.

HME: Well, no, it's more complicated than that.

HME: I was fortunate in many ways. I worked in times when I was not bothered by the secret police, I didn't go to prison, I was not forced into exile. I was fortunate to be published, I had possibility to say what I wanted, so I don't think I have any reason to complain. And I don't like whining poets. Poetry is a risky thing. If you take on the risk, it is wrong to complain.