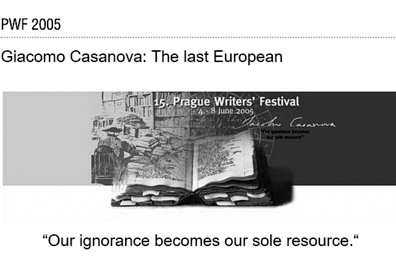 When I got on the plane I realized that I’m traveling to a festival devoted to Casanova, and I found it slightly shocking. Well, I guess for you it has many connotations - it evokes a lot. Casanova was a famous seducer, and his name has actually become a term in everyday language, and, perhaps, there’s a slight dissonance because the heroes of my novels are not Casanovas. In Whatever, the first one hasn’t had sex for years, and is depressed about it. He keeps trying and trying and is depressed about failing, while the other is trying to seduce any woman he comes in contact with, but he’s ugly, he has no charm, and no success. He’s never actually seduced a woman. I guess, if those people thought of someone like Casanova, they would have been terribly jealous. They would hate him, perhaps they would even think of killing him. Anyway, it is difficult to imagine a piece of literature so unlike Casanova.

From the audience:  Can I ask another question?

Houellebecq:  Well, I’m not the boss here, so why not?

From the audience:  You have been called the Karl Marx of sex, whereas Casanova is often referred to as the embodiment of sexuality. On a spiritual level, do you feel close to his works? Marx was an enormously clever person, but also superficial and, in a sense, false.

Houellebecq:  I believe that my topics run much deeper than those of Marx. Do you think there are any parallels? I think I’m doing much better than he did.

From the audience:  If I may, I want to ask a very simple question. Did you vote in favor of the Constitutional treaty in the referendum, or against it?

Houellebecq:  Well, first of all I want to remind you that it was a secret vote, so I’m not really obliged to tell you how I voted. Having said that, let me tell you that I didn’t vote at all, because I didn’t know what to think of the whole thing. I must tell you that I was quite happy that the result was against the Constitution. Not for the sake of the referendum as such. I thought that the French would not have the guts to say no. Ninety percent of the political parties were appealing for a yes vote, and I figured that a lot of people wanted to say no, yet there was a lot of pressure to vote yes. A case for yes was being made very strongly by everyone in the world, and I thought that it was going to work. So I was quite pleasantly surprised that they found the courage to say no. I like the courage, I like the courage to say no. It shows that democracy doesn’t work that way. Deputies, members of Parliament, are not representative of the opinions of the population - that is a false idea. Quite some time ago, I noticed that we no longer live in a democracy, but I’ve never seen a proof as salient as this to back up my thoughts.

From the audience:  Do you think that it is possible that sex can actually be killed, that it can die?

Houellebecq:  Things tend to turn out badly, sometimes really badly. The only problem that sex poses to my heroes is that it doesn’t exist, so I guess from that vantage point it is almost a caricature in my work. If sex exists, things turn out well.