Jan Velinger asked Michael to describe first the spiritual roots of the festival through his literary activities in London in the late 1970s, before he moved things to Prague in 1991. May 2010. 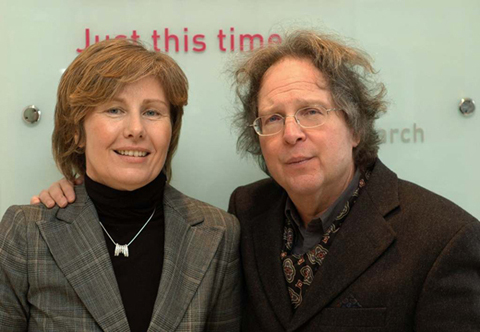 Michael March "My connection was that I started readings in London after the Helsinki Accords, at Keats' house, with the cooperation of the British Council, because money was set aside to bring writers from the East to the West - if they were allowed to come. And having read in Poland, having translated Zbigniew Herbert, I was very interested in having Polish writers, Czech writers, Hungarian writers, come to London and read. Because, their landscape was a moral one, attached to the Second World War and the humanistic values which were destroyed; and one needed to feel this 'rebirth' of values."

Nevertheless in practice it must have been extremely difficult to get those writers out, to bring them to London...

"Of course at first it was: writers such as Vladimir Holan - one of the great writers - who was even hidden within his own society. But, within time, writers were coming out, such as Miroslav Holub and even Ivan Klima. I'm talking about the late 80s and certainly after 1989."

When you chose to start a new writer's festival elsewhere, why did you choose Prague over other Central European cities?

You are still confident in the PWF and its impact as a cultural and intellectual event...

"Well, all small people are confident (laughs). I would say to you that this feeling of confidence comes from a sense of comparison. Mendelstom said that 'One cannot live without comparison'. Prague 'existed at a level of 'fantasy', in the same sense it still exists in a level of fantasy now. It's like from Kafka: his characters realise that there is change but they are also very 'comfortable' so they realise there is no change. And so they never question their circumstances. Historically, [the Czechs] have been provincial, militarily provincialism has been enforced, they have been enclosed for many, many years. Now that it's open it's really a question of using the sense of comparison individually in each person's life, and then reconstructing this within the society. Our 'brief' is to bring writers, to bring ideas, to Prague. One can be fairly comfortable in trying to do that. The reception over the years has been exceptional. We have a very great audience of both young Czech students and also the international community."

Who then are some of the writers coming this year?

"We're bringing Nadine Gordimer, who received the Nobel Prize in 1991. She opposed Apartheid, she understands oppression, she's an absolutely magnificent writer. In a way we're introducing her to the Czech public because only one book of hers was published in Czech. Of course she's extremely well-known internationally but she's not terribly well-known here. So we're introducing her. We're going to present the winner of this year's Seifert prize Miloslav Topinka, reading with Zbigniew Mahe, a Polish author. And also from Poland: Tadeusz Konwicki, one of the really great prose writers of the 20th century. He wrote 'A Minor Apocalypse' and 'A Polish Complex'. Very important novels, set in the times of Solidarity. Two really extraordinary writers that we're really introducing: Norman Manea, a Romanian who settled in America, who has written his last recollection 'The Hooligan's Return'. Wrote about Ceaucescu in a collection of short stories titled 'October, 8 o'clock', coming from New York. And we're inviting Antonio Tabucchi, a real 'magician', who has this sort of shadowy magic, detective tales gone astray. And unfinished, the thread sort of unfinished and run out. You wind up in rather unknown territories."

One of the traditions of the festival has been to choose a writer from the past to act as a thematic or philosophical mascot: Who have you chosen this year?

"We chose Joseph Roth. Joseph Roth was born in 1894 and he experienced the collapse, the destruction, of the Austro-Hungarian Empire. As well as the rise of fascism and the eventual burning of books in 1933; he's a catalyst, in this case, to define the present position of Europe. He witnessed the destruction of European culture, he experienced it, he said 'the individual is always defeated in the end', and for us art 'negotiates' the price of defeat."

If it can be summed up to a moment or meeting or a single event at the PWF over the years is there any one moment that stands out for you?

"I would say that there are memories of 'near misses' for the festival. In 2001 Arthur Miller was supposed to come. I went to New York to speak with him, spent two days together, and during the conversations he said well you know, Michael, I have a feeling that there is going to be a great tragedy - it's very possible for someone to bring a nuclear weapon into New York harbour and blow up New York. Arthur was really dead serious about this. Of course it happened a different way but Arthur didn't come to Prague, he was a little bit ill, he didn't want to travel, at that point to Prague. The point is that playwrights and writers have a very great instinct and then you see things that are created that come true."

There was speculation in the fall that this year's PWF might not go on, because of financial problems it was facing, because of sponsors pulling out, and because the city of Prague itself not pledging as much as you had expected. Now the festival is going through, but has this year's experience left scars?

"Well, we plan to sell all the furniture and sell all the autographed books (laughs). We made a commitment to do this festival - we will do this. We believe that we will have help from the Ministry of Culture, and this will allow us to continue this year. As you know, the festival will also be in Vienna, and we will see... The irony is - and this is not a fairy tale - is that people really enjoy this festival. Each year we have a wider audience, something that is natural, takes time to grow, it's organic, it's within the society. If you talk about sponsorship and you talk about business culture, then we're talking about something which is marketable, which is materialistic. That is on a very different level from patronage. And there is the great divide: between the patron - our friendly Medicis - and the current business community, who distance themselves from 1989 as so many years... this enthusiasm, they were the first to lose it! So, they are not, basically, patrons they are 'sponsors' of their own products and their own predictability. And culture is unpredictable. Remember: we're doing something very unique in Prague, we're bringing writers for one week. They're not just flying in, flying out, shaking hands, you know, they're staying in Prague. And they're absorbing Prague. And they are available to Prague. And that is absolutely unique."