This Is Not Propaganda

A timely volume of analysis and memoir shows how populism is destabilising democracy and reshaping our sense of normality,

This book provides a series of Pomerantsev’s datelined dispatches from those myriad conflicts, “the digital Maginot Line”. It is required – and bleakly entertaining – reading for anyone wanting to understand the surreal scale and intent of the efforts to destabilise democracies. This Is Not Propaganda: Adventures in the War Against Reality by Peter Pomerantsev is published by Faber (£14.99).

NOTHING IS TRUE AND EVERYTHING IS POSSIBLE 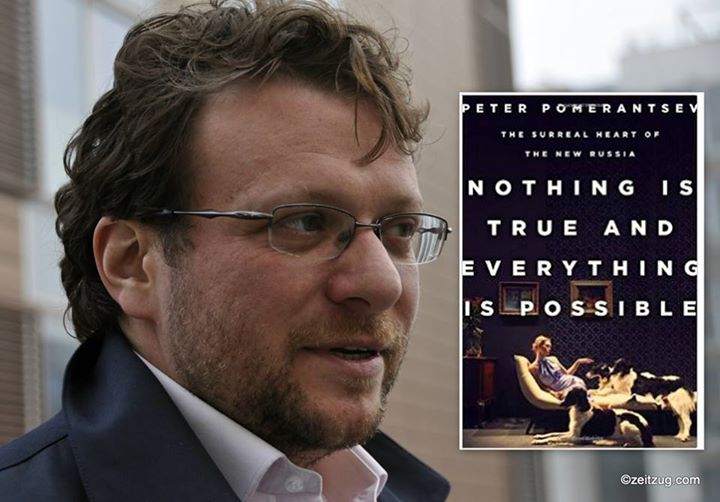 In the new Russia, even dictatorship is a reality show.

Professional killers with the souls of artists, would-be theater directors turned Kremlin puppet-masters, suicidal supermodels, Hell’s Angels who hallucinate themselves as holy warriors, and oligarch revolutionaries: welcome to the glittering, surreal heart of twenty-first-century Russia. It is a world erupting with new money and new power, changing so fast it breaks all sense of reality, home to a form of dictatorship—far subtler than twentieth-century strains—that is rapidly rising to challenge the West.

When British producer Peter Pomerantsev plunges into the booming Russian TV industry, he gains access to every nook and corrupt cranny of the country. He is brought to smoky rooms for meetings with propaganda gurus running the nerve-center of the Russian media machine, and visits Siberian mafia-towns and the salons of the international super-rich in London and the US. As the Putin regime becomes more aggressive, Pomerantsev finds himself drawn further into the system.

Dazzling yet piercingly insightful, Nothing Is True and Everything Is Possible is an unforgettable voyage into a country spinning from decadence into madness."

Peter Pomerantsev was exiled from the Soviet Union at the age of ten months (1978) together with his family Liana and Igor Pomerantsev. He settled in London, also lived in Munich, Edinburgh, Berlin, New York, Prague. When he finished university he went to Moscow and fell in love with the place. First, he was an ex-pat working in policy advice, then he became a television director and producer, making films about the city he had become obsessed with for both westerners and Russians. He stayed in Moscow nine years. In November 2010 he returned to London. Peter Pomerantsev is a British author and documentary producer. His writing is featured regularly in the London Review of Books, Newsweek /Daily Beast, Foreign Policy, Le Monde Diplomatique, Financial Times, the New Yorker.

Peter Pomerantsev has written the most bitter indictment of a nation’s politics and society going wrong since William Shirer’s 1941 Berlin Diary. Pomerantsev has also written a calm and incisive report on the current state of affairs in Russia. Yet it reads like a comedy of manners, a dark and grotesque comedy of manners, a State Department white paper co-authored by Evelyn Waugh and Franz Kafka. And not only that, but Nothing Is True is a bildungsroman, too. By P. J. O'Rourke

Nothing Is True is so fun to read, so sparkling and colorful, that it’s a while before it hits you that Pomerantsev is throwing daggers not just at Putin, but at the West. (In both style and moral fervor, Pomerantsev is reminiscent of classic period Tom Wolfe.) Recently, Pomerantsev says, Russian dissidents have taken to invoking “London” and “the West” not as aspirations but “with a light disgust, as the place that shelters and rewards and reinforces the very forces that oppress them.” Ann Marlowe

That — and the question of how the Kremlin distorts reality — is no longer a question for Russians alone. The crisis in Ukraine has been fought just as much through the telling of its narrative as through its deployment of weaponry. Russia has directed its propaganda campaign to devastating effect, not only at home but through international ventures like the television news channel RT (formerly Russia Today), which continues to expand, most recently opening an affiliate in South America and announcing a ­London-based version to focus exclusively on Britain. It’s an information war, and the reality into which the Russians in Pomerantsev’s book have been indoctrinated is the Kremlin’s latest export.  Miriam Elder,The New York Times

In “Nothing Is True and Everything Is Possible,” Peter Pomerantsev captures as well as anyone the money-soaked cynicism and manufactured media echo chamber of Moscow under Putin. “ ‘Everything is PR’ has become the favorite phrase of the new Russia,” Pomerantsev writes. His entertaining memoir recounting his adventures in the dark heart of the propaganda machine helps shed light on why Putin’s gilded, image-conscious Moscow seems so appealing to America’s TV-obsessed new president and his clan. Susan B. Glasser, Washington Post

Author Peter Pomerantsev talks to David Greene about how the Kremlin has maintained Russian President Vladimir Putin's popularity at home despite this year's challenges. NPR

Reading and discussion with Peter Pomerantsev about the book “Nothing Is True And Everything Is Possible: The Surreal Heart Of The New Russia (video - 50 minutes)